To keep updated on all changes at the Chanute Public Library, follow our Facebook page @ChanutePublicLibrary. If you need help getting set up with hoopla or other electronic resources, please give us a call, 620-431-3820 or email us at publiclibrary@chanute.org.

The mission of the Chanute Public Library is to provide modern library resources and services necessary to meet the evolving educational, recreational, and informational needs of the public, thus enhancing individual and community life.

Meetings of the Board of Trustees are held on the second Monday of each month at 5:00 p.m. in the Leighty Conference Room at the Depot. No meeting is held in the month of August. The public is invited to attend. If anyone wishes to have business acted upon at a board meeting, they should contact the Library Director or Board Chairman at least one week prior to the meeting so that such business may be included in the printed agenda.

In 1902, the Atchison, Topeka and Santa Fe Railroad began construction of the Chanute Depot. The first floor housed the Wells Fargo, baggage rooms, the ticket office, gentleman’s and ladies’ waiting room, a news stand and parcel room. The north end was occupied by the Harvey Lunch Room and kitchen. The second floor was divided between living areas for the Harvey waitresses and division offices for the railroad. In 1917, the Santa Fe expanded the Depot by adding north, east and south wings to the building. The new additions were designed and built to blend with the existing structure. For many years, this building served as the largest Santa Fe depot in Southeast Kansas. In 1971, the Chanute Depot saw its last passenger train and twelve years later, the Santa Fe completely abandoned the building.

In June, 1991, with work on the roof already underway, renovation within the building began. While plans called for the renovation to allow for current and future needs of the new residents, much of the original architecture of the building was maintained. With few changes, wall placements on the first floor were maintained, and ceilings and wainscoting were either preserved or replicated. Throughout the building, lighting, floor coverings and colors were chosen to blend into the early 1900’s architecture. The library moved into its new home on May 9, 1992.

The Public Library Association was organized with S. W. Brewster as chairman on September 16, 1901. Their purpose was to promote the importance of a public library so that a City levy could be obtained for it’s maintenance. On March 22, 1906, the Carnegie Library Building was dedicated and the Children’s Room opened in January 1928. The library continued to expand with remodeling occurring in 1938 and 1962.

Then, on April 17, 1990, announcement was made that the Santa Fe Depot would be renovated to house the Chanute Public Library and the Martin & Osa Johnson Safari Museum, allowing the city to preserve and restore the depot, and provide much needed space for the museum and the library. 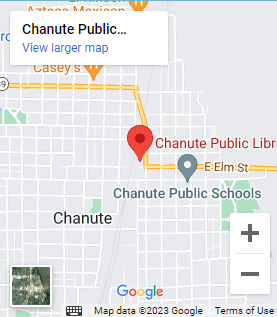